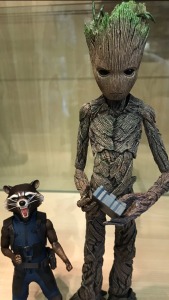 Marvel is a huge company with a vast catalog of characters. They are more than just comics now and most of the world knows who their characters are now. Every movie they make is a huge hit that makes multi-millions of dollars. There’s a lot that goes into choosing the stories and characters for those movies. If the combination is off the movie could be Marvel’s first dud, but that hasn’t happened yet. Why? Of course, Marvel’s main heroes like Captain America and Thor bring people into the theaters. These characters have strong backgrounds and a myriad of stories about their exploits. I think what really stands out though, is the successful use of the smaller characters plucked straight from the comics to the big screen.

Marvel doesn’t have to stick to canon or pay any respect to the comics now that they have an established cinematic universe, but they do. I believe the choice to try and be faithful to the fans and properly share these special characters to a larger audience is why Marvel is so successful. There are plenty of these characters across the MCU and I have no doubt more will make it to the big screen in the future Here are just seven examples of characters that Marvel dug deep for:

The Tinkerer whose real name is Phineas Mason first appeared in The Amazing Spider-Man #2(1963). In the comics he was never really a major villain. He never gained enough fame to have his own comic or appear on any t-shirts, but he is a part of Spider-Man history. He appeared in Spider-Man:Homecoming as the tech guy for Adrian Toomes, the Vulture. He showed ability in creating tech that not many others in the MCU have displayed. By using The Tinkerer we are made aware of a lower level of villains and characters that could impact Spider-Man’s life. This also gives us hope and gets us excited for the return of the Tinkerer and his tech or for another uncommon villain to make an appearance.

Eitri is the Dwarf King whose first appearance was in The Mighty Thor Annual #11(1983). He is the one who created Mjolnir, Thor’s legendary hammer. He has only appeared here and there in the comics since then. In the MCU, he appeared as more of a giant played by Peter Dinklage in Avengers Infinity War. Eitri along with some help from Groot made Stormbreaker, an axe, for Thor to use against Thanos. His appearance showed that Thanos was ravaging every corner of the Marvel Universe to acquire the Infinity Stones while reminding us of Thor’s mythological origins. Eitri wasn’t necessary to the MCU and I doubt anyone was asking for him, but it made the story feel more authentic while paying tribute to the comics.

The character of Ghost doesn’t even have a revealed identity in the comics. His first appearance is in Iron Man #219 (1987). He worked for an IT company and is a highly intelligent, tech genius that eventually went off the deep end. The phasing technology he wields allows him to be invisible and pass through anything. He began as an Iron Man villain and has appeared in various roles including thief and assassin around Marvel Comics since. Ghost appeared as a woman and complex adversary of the heroes in Ant-Man and the Wasp. Her origin was a little different, making her more unstable with all her anger focused at Hank Pym. Choosing this character was an unexpected surprise for comic fans and a unique and mysterious character to pit against Wasp and Ant-Man.

Korg is a very specific character in the comics for Marvel to translate to the big screen. His first appearance is in Incredible Hulk Vol. 2 #93(2006). Korg is an alien called a Kronan that looks to be made up of rocks and has increased strength and durability. Hulk met Korg during “Planet Hulk” while they were being forced to fight as gladiators on Sakaar. While fighting together and freeing themselves, Korg became part of Hulk’s fighting unit and new family called the Warbound. In the MCU, Korg actually met up with Thor as they were both being forced to be gladiators on Sakaar in Thor: Ragnarok. Korg serves as comedic relief in the film but does befriend and aide Thor. Korg does go on to fight alongside Thor and Hulk in Avengers Endgame. The choice to bring Korg to the big screen shows that anything is possible. Korg was an alien made of rocks before being turned into a star and household name with a little ambition from Director Taika Waititi.

Arnim Zola is a Nazi biochemist that enjoys his experiments no matter how twisted they are. His first appearance was in Captain America #208(1977). He came to work for the Red Skull and aided him in his ongoing battle against Captain America. Zola eventually loaded his mind into a mechanical body and has continued to menace the Marvel Universe to this day as a walking TV screen. Arnim Zola appeared as Red Skull’s still-human scientist during WWII, in Captain America: The First Avenger. The real treat for the fans though was Zola’s modern day reappearance in Captain America: The Winter Soldier. Zola appeared as a giant computer with a digital face still attempting to destroy Captain America. The character’s unorthodox look in the comics lends to one never imagining that he could appear in a blockbuster live action film, but Marvel tried it and succeeded.

Batroc the Leaper whose real name is Georges Batroc first appeared in Tales of Suspense #75 (1966). He is a French master of martial arts and has superior acrobatic skills. He is often seen performing flying kicks and jumping around his opponents. He has worked for both good and evil as he is a man for hire, but has most often gone up against Marvel’s heroes. He is a mustachioed character with no superpowers and the title of “the Leaper”. This combination makes him seem like a highly unlikely choice for a villain in a cinematic blockbuster. In the MCU, Batroc appeared in Captain America: The Winter Soldier and was played by UFC great Georges St. Pierre. Batroc has a fantastic hand to hand fight against Captain America in the beginning of the movie. In the scene, he demonstrates his skill and does seem to leap about as he fights. The character ends up being a comical nod to the comics while serving as a strong kickoff to the action in a great movie.

Guardians of the Galaxy

The Guardians are the epitome of Marvel going deep into the comics and pulling out success. Until the first movie came out, most people did not know who the Guardians of the Galaxy were. Their first appearance came in Marvel Superheroes #18 (1969). The Guardians of the Galaxy(GotG) began as a team of super heroes in the future in an alternate universe. The only member from the original comics that is somewhat a member in the movies is Yondu. The GotG weren’t even very consistent in the comics and did not just pick up and go with their own series. In the MCU, the (GotG) are a successful action comedy franchise. Guardians of the Galaxy pulls characters from all sorts of obscure corners of the Marvel universe. Rocket is a blaster wielding, talking raccoon and Groot is a living tree that only repeats 3 words. Ego is a living planet with a giant face in the comics, while Kurt Russell plays him as a powerful blockbuster villain in Guardians Vol. 2. There are countless others used in this same fashion between the two Guardians movies. If Marvel can take a ragtag group of C-List characters, pit them against some other C-Listers and make a franchise, than anything seems possible.