I am an X-men fan and have been since I was a kid. I haven’t always kept up with the comics though. I drop in and out when the stories or characters look interesting. Right now I’m not up to date, but I decided to pick up a copy of House of X #1. House of X is the new X-Men spanning storyline that will have significant impacts on Mutantkind and the Marvel Universe.

The story is written by Johnathan Hickman and will go between two main titles, House of X and Powers of X. The first issue is double-sized and is packed with opening statements and new questions to be answered. The issue serves as mostly an informational piece that provides the need to know terms, characters, and statuses. It’s almost like a news report that brings the reader up to date on the situation. In this case, the situation looks to be an impending major conflict. Xavier wants the new mutant sanctuary to be viewed as a legitimate nation alongside the rest of humanity. The issue revolves around a meeting between human ambassadors and Charles Xavier to discuss the terms, but the meeting does not go as expected. There are a few other moving pieces that add some more pressure to the building tension in the issue, but everything is still just getting started. I think the weekly releases of the two comics will work well to tell the story and keeping up with all the previously mentioned moving pieces.

There is a unique style aspect used in this issue that I like. There are splash pages that look like a screen in a database somewhere with information on topics being brought up in the comic. It’s almost like watching a movie and Googling what is mentioned to gain understanding. I haven’t really seen anything like it done before, and it works well for this issue to get all the details out and help kickstart this major event. It also provides extra information and clues for the reader to delve deeper into the story and become more invested if they want. It is a bit strange though to read a couple pages and not really understand what is going on until you read the next page and come back to it. It should make for better comprehension, which may help readers keep up with precisely what’s going on.

There wasn’t much characterization present in the first issue. We kind of have an idea of who’s playing what part, but Xavier only spoke a few simple lines, and he’s who we want to hear from the most. We see Logan, but he doesn’t say or do anything significant. As time goes on, we will find out more of who’s on what side and who may jump teams, but really just the primary battle lines were drawn in this issue. Hopefully, we will get a little deeper into these characters psyches and how they’re feeling about what’s going on. These big events can sometimes be a little too action-centric, and the characters are just sort of left two-dimensionally accomplishing goals. This event has the potential to be an epic drama like A Game of Thrones for the X-Men. 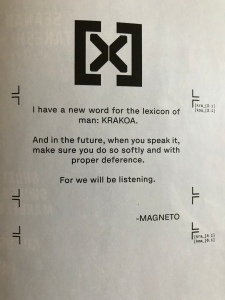 The story is based around Krakoa, a jungle paradise with a collective consciousness. It is housing and protecting all of Mutantkind. It does this by only allowing mutants to enter through its instant travel gateways. These can whisk mutants, and friendly humans with permission, away to any other gateway. Krakoa also creates flowers with valuable medicinal uses that would highly benefit humanity. These flowers can allow humans to extend their lives by 5 years, cure mental based diseases, and serve as super universal antibiotics. These, along with the instant travel gateways, provide mutants with valuable major exports from their new home and powerful bargaining chips to hold over humanity. Charles Xavier appears to be a savior figure leading the mutants to their rightful station in the world, while Magneto seems to be acting as his general.
On the other side is Orchis, which is a united front of humans from different organizations like A.I.M. and S.H.I.E.LD, who’ve undertaken the task of saving humanity from proposed doomsday threats. Besides all the new developments involving Krakoa, they’ve discovered that Mutantkind is growing at an accelerated rate and will be the dominant species on Earth. They are actively working on a space station built to transport humans away to safety for survival. This is an intriguing development as we have rival organizations uniting for this joint effort against the mutants. This shows the level of seriousness as we see humanity banding together and really leaving only two distinct sides in this fight. 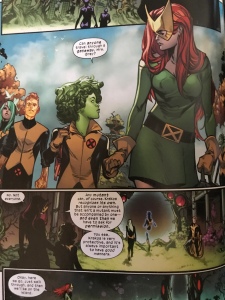 The most fascinating scene is Cyclops interaction with the Fantastic Four. At first, they are very friendly since they have known and fought alongside each other for years. When Cyclops wants to take a particular mutant criminal that the Four just captured though, the atmosphere changes. Things turn hostile, and we can see that Cyclops feels strongly about the superiority of Mutantkind. Cyclops also brings up Franklin Richards who we find out, through a database page, is the only Omega Level mutant aligned with the humans. This will obviously be a critical point in the future.
The other interesting point, explained by one of the database pages, is No-Place. It’s described as a habitat that is within Krakoa that Krakoa doesn’t know exists and is essentially a tumor. This is another extra bit of information to pique our interest. We don’t know precisely what No Place is, but it’s out there somewhere, or it could be. It seems like an opportunity for someone or something to take advantage of the Krakoa situation.
The last page of the comic is where we find out how grave the situation really is. Magneto tells the Ambassadors and us that basically the point of the whole first issue and their meeting is to let humanity know that mutants are their new gods. This was an abrupt and chilling ending to the comic. Although this kind of talk is expected from Magneto, he seems to be speaking for Xavier as well this time. This single line took us from learning about Krakoa and all the players in the game to understanding that playtime is over.

This issue is a great kickoff to what promises to be a notable event. It definitely opens up the Marvel universe for some substantial changes. Depending on how serious the division between Mutantkind and humanity, X-Men and mutants, in general, may end up enemies of the rest of the world. This will be a huge change and would indeed affect the Marvel Universe for years to come. I foresee House of X becoming a Civil War level event. The lines have already been drawn now we just have to see where everything fits into place.