Escapes & Strolls is mainly for trips to theme parks or other attractions that get away from the crowds and stress. Although this trip did not fit those criteria, it was an escape to a unique place, and I think it’s important to note the experience there. I have been excited about Oga’s Cantina since they announced there would be a bar in the new Star Wars land. Since we’ve gotten closer and Galaxy’s Edge opened in Disneyland in California, my excitement has only grown. I am a big fan of Trader Sam’s Grog Grotto at the Polynesian, which is another small, heavily themed, somewhat exclusive bar that Disney has recently created. I also enjoy Jock Lindsey’s Hangar Bar, which is a heavily themed Indiana Jones bar that’s a little more laid back. I took all this anticipation, high expectations from those bars, and my love for Star Wars with me into Oga’s Cantina.

We checked a couple of times between two separate visits to see if the bar was accepting walkups, but we were turned away. There were no reservations any time we tried to make one on the app. Finally, we happened to be at Hollywood Studios late one night during the week and actually got into the walkup line. Even in the expected 20-minute wait outside the bar, it felt like we wouldn’t get in. One cast member handed us a menu, one checked us into their system, and another walked the line telling us the strict rules. “Stay where we put you, Oga’s is 90% standing room, 45-minute limit inside, two drink maximum were the main rules declared several times. At this point, I was excited that I would be getting in but worried about all the rules. As a Star Wars nerd, my thoughts flashed back to Han blasting Greedo and Luke’s scuffle in the cantina on Mos Eisley and wondered what the rules were there. 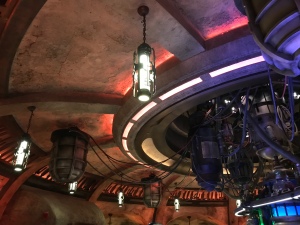 Unexpectedly, the line moved very quickly, and we got pulled aside along with another party and escorted inside to our designated spot. On the way in, the rules got reiterated by our escort. As we entered, it felt like walking into a set from a movie. The bar looks vaguely familiar, but it’s not a replica of any specific Star Wars bar. There was unfamiliar music with a beat playing as the soundtrack. The bar is oval-shaped with people all around it. The bar itself takes up most of the small space inside the building. Outside of the actual bar, there are small standing tables and little nooks with shelves to put your beer on. The large lights and ceiling decorations immediately grabbed my attention. These are prominent and unusual looking, so I think they stand out the most in the bar. On the left of the oval, there is a smaller elevated alcove with Rex, the droid pilot from Star Tours acting as a DJ. I only got a glance of him as we briskly walked into our spot on the other side of the bar. 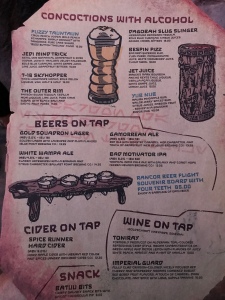 The space at the bar was filled with shoulder to shoulder patrons. Our spot at the very end of the bar wasn’t so bad in this regard though, because there was some extra room with no one on one side of us. The small alcoves along the wall looked very packed with guests’ backpacks in the faces of guests in wheelchairs. Everyone did seem to stay where they had were put, which left just enough space for servers to get around the room.

There are a couple of tanks above the bar with some Star Wars creatures, but they aren’t too animated. The taps themselves look familiar and will remind fans of the classic cantina at Mos Eisley. We didn’t spot many other recognizable Star War’s references or place any disreputable characters. We had already picked our drinks from having the menu ahead of time, and we were greeted quickly by a friendly bartender. There were two tending our side and making drinks for delivery to the wall alcoves. There looked to be about five total bartenders making drinks behind the bar.

There are a lot of drink choices on the menu. There are about nine signature Star Wars-themed alcoholic mixed drinks and eight non- alcoholic. There are several beers, a cider and two wines on draft and are all made specifically for Oga’s by various outside crafters. Due to our experience with The Hanger Bar and Trader Sam’s we were excited by the mixed drinks just as much as the craft beers. From our spot at the bar, we noticed the mixed drinks are all from a “draft” as well. There are no bottles of liquor or mixers in Oga’s. There are some special add-ins and decorations for the mixtures from the drafts, but that is it. Compared to the fresh, made for you drinks at Trader Sam’s I figured these mixes would be disappointing. The mixed drinks will run you at least $15, which is comparable to the price for fresh, strong, and delicious cocktails at Trader Sam’s. After seeing this, we decided for this trip to stick with the unique draft beers.

We were tempted to order the beer flight which uses Rancor teeth as cups, but we decided to wait on that too. We ordered the Bad Motivator IPA and Gamorrean Red Ale for $13.25 each. The IPA is delicious, it’s got a little citrus flavor, but not too much and it’s very dry. The Red Ale is also good. It’s got a strong taste, but it’s a little closer to an IPA than some Reds, maybe due to some extra hops. I would order them both again and recommend them to the casual and frequent IPA drinkers. The beers came in a pretty normal glass and looked to be a standard pint, so the price is a little off-putting. I usually order good IPAs at Disney for about $10, so I guess the extra $3 is for the privilege of being in Oga’s and being able to order these exclusive beers. 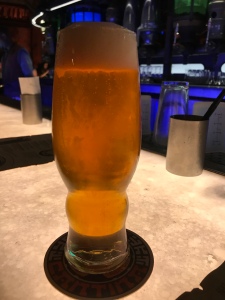 We saw some of the other specialty drinks that bubbled or had special glasses, but nothing was neater looking than the previously mentioned Rancor teeth. There is a mixed drink that requires you to purchase the cup that costs $45, but I didn’t see it. The Batuu Bits are the only food item on the menu, but the description of “crispy bits” with spiced dip was too vague to sell us. When we saw it in passing though it did look interesting and I would order it in the future. There is also a secret charcuterie board not listed on the menu that we did see, but it didn’t look as impressive as I would have hoped.

The 45-minute time limit didn’t seem to be a problem for our side of the bar. We could hear the music DJ Rex was playing in the background but could not see him at all or hear anything he might have been saying. Rex was on the opposite side, and the props in the middle of the bar completely blocked the view. Other than Rex, there wasn’t really anything going on or to look at that I could see. I observed the people next to us at the bar and in the cramped nooks, and they seemed to be looking around for something more right along with me. They also were leaving more frequently than every 45 minutes. There is a lot to see and discover in the other themed bars I mentioned, but at Oga’s the walls and space is clean and clear. Even if there is more to see there, you cannot move from your spot, so it’d be hard to discover anyway.

Between the drinks being $13.25 and our designated spot without a view, we decided to wait to try another drink till our next trip. We paid our tab and headed out. On the way out, we did get another glimpse of Rex and one photo. Maybe the mystery of the other side of the bar will give us something else to look forward to and return to Oga’s. Right now, I don’t feel the rush to go back. The situation is pretty tense, and although the beers were good, they were just expensive craft beers. We only waited 10 minutes to get in, so maybe that had an impact on our impression, but I would have been disappointed if I had waited a long time. Eventually, I think the lines will calm down, and maybe Oga’s won’t have to have as strict rules. Perhaps there will be more Easter eggs or fun traditions added in the future to give the cantina more personality. While it is not a place I’d try to or want to get away to, it is a unique Disney bar experience. Baseline Tap House is an excellent choice for a bar just outside of Galaxy’s Edge. Baseline has cheaper beers, a calming atmosphere, and usually not much of a line to order.

I recommend Oga’s Cantina for Star War’s fans who really won’t be happy unless they see it for themselves. It’s an exclusive Star Wars experience and everything there is Star Wars themed. I hope to revisit the Cantina in the future when things have calmed down, and the bar has found its stride.