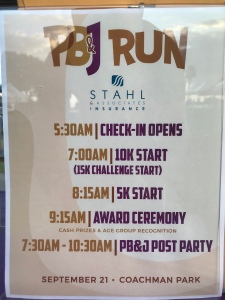 Last weekend I had my second run experience, and it was completely different from the Disney Star Wars Half Marathon. I think doing this run taught me a lot more than I would learn on my second Disney Half Marathon. The Peanut Butter and Jelly 10k and 5k took place on 9/21/19 in Clearwater. The 10k was first at 7 am, and the 5k began about an hour after that. Those participating in the 15k challenge had to be back from the 10k in time to start the 5k at the race start with everyone else. 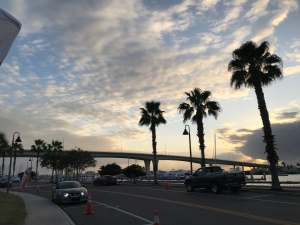 The race was on Saturday morning, and although we got off early, we still had to work on Friday. Only leaving early on Friday would have been fine, since we got a hotel within walking distance of the race except for packet and race bib pickup. The early pick up was until 7 pm on Friday, and with traffic, it would be a very close call. We prepacked the best we could, so we could grab our bags and go after work. Of course, it was still a mad dash once we got home. Pre-packing helped, but I would recommend a race checklist to make sure you don’t forget anything essential since it’s more than just a vacation. Traffic heading to Clearwater was heavy, and our anxiety was high, but we made it just in time to grab our packets early. Thank you to the PBJ volunteers for staying a little late! 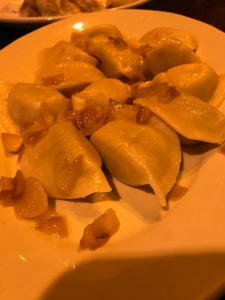 A consequence of making it in time to pick up our packets was food timing. The dinner the night before the race is crucial to success. You want to be strategic in what you eat, how much, and when you eat it. We ended up eating just before 8 pm. The race start time was 7 am, so this was probably a little late. We chose something high carb and relatively easy to digest, pierogies. I had never had or thought of perogies as a pre-race meal, but it’s somewhat similar to pasta, which is a favored pre-race choice. There weren’t any pasta places nearby, so we tried the local Polish restaurant, and the food ended up being delicious. We passed on the extra fatty choices and made sure not to pick anything high in fiber. I ate until I was full, but didn’t push it. My goal was not to feel bogged down or mess up my sleep and be ready to eat again in the morning.

We checked into the hotel and started calming down to go to sleep. We set out all of our stuff for the morning, as it can be a little hectic and disorienting to wake up early and go. We made sure to give ourselves adequate time to get some good rest because pre-race jitters are a thing. A word of warning, beware of the unknown on race trips. Although you know you have to run a race and when it starts, pretty much everything else is up in the air. In our case, the wild card was the hotel AC. The AC was cold, which is a must for hotel stays, but it was also loud. Every 15-30 minutes, the AC would kick on and would either jar me awake or drive me further into the insanity of being forced to stay up all night. Yes, I brought a sleep aid, but even that didn’t help me. I thought about turning off the AC or asking to switch rooms, but Kim seemed to be able to sleep through it, and I figured it was probably the same system in every room. It was a long night, but I had got good sleep the night before, which is just as important. 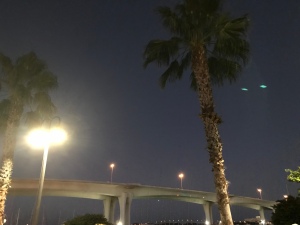 When the alarm went off, it was still dark out. It was a little disorienting, mainly because I hadn’t slept much, but my excitement for the race kept me on track. Setting everything up the night before was very helpful as there was no searching or rushing. We immediately had our breakfast of plain bagel thins, peanut butter, bananas, and cups of water. We’ve used this meal before and are used to it, so find something that works well for you and practice with it. You want something high carb, and again probably avoid high fat and high fiber. It’s also best to have this an hour or two before the race if possible. Coffee or something with a little caffeine can also be smart at this time to get moving and focused. 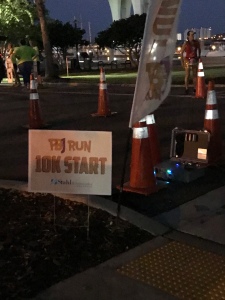 After eating and getting dressed, we attached our race bibs. Although we still had an hour till the race, attaching the bibs in the light and calm of the hotel room kept us from having to struggle with it at all. Once we had everything gathered together, I proceeded onto my pre-run warm-up and stretching. A race trip checklist is a valuable tool, especially for your first couple of races. The first step in my pre-race routine is to use a foam roller to loosen up and try to prevent injury. Well, I left the foam roller at home. Luckily, I realized this when I was setting things out in the hotel the night before. As a substitute, I put a water bottle in the freezer so it would be hard by morning. When I was ready to roll, I pulled out the water bottle and put it in a sock. I then used it as a very firm, but adequate foam roller substitute. Once I was done rolling and stretching, we headed out to the race. 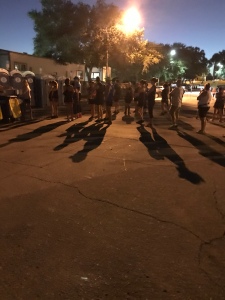 The race start was only about 15 minutes walk from our hotel. It was a little daunting since we didn’t know the area, and it was still dark, but we had done our research. Once we got about a block from the park where the race started the excitement set in. Runners were warming up and pre-race jogging all over the area. Once we confirmed where the starting line would be, I continued to do my pre-race warm-ups. Of course, the pre-race jitters and mixture of water and caffeine I was drinking got to me, and I realized I had to try to use the bathroom before the run. At this point, it was about 18 minutes before the start, and there were three long lines of people waiting to use the dozen portable toilets. The starting line was close enough for me to risk waiting in line, so I went for it. I made it back to join the mass of people at the starting line with moments to spare. People stood and crouched shoulder to shoulder stretching and bouncing in the dark waiting to hear the sign. There was someone with a microphone saying something, but I was too far back to understand what it was. I did hear the pop of the start gun though, and the race was on. 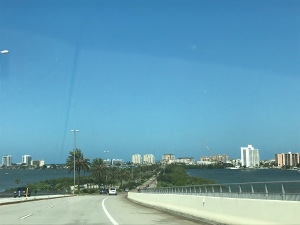 The beginning of the race is frustrating when you’re not towards the front. There were no corrals with this run, so everyone started at the same time. Everyone running together leads to a very bunched up and awkward first mile. Those who run fast have to weave in and out of those who do not. In the dark, in a tight running space, this makes for some excitement and danger. I wasn’t trying to make any particular time, but running at certain speeds can be uncomfortable if you aren’t used to them. I was in desperate need of a little space to break into more of a run then stumble/jog. Shortly before mile 2, the crowds thinned out as everyone found their pace. 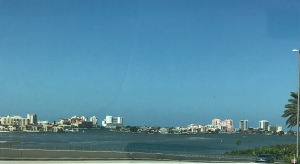 The weather and the view on the run were beautiful. It was on the Clearwater Memorial Causeway over the Gulf of Mexico and into Clearwater Beach. I wanted to stop and take pictures, but I also wanted to run the race, so I just tried to take it all in. I didn’t bring headphones, but I was never bored once during the 6 miles. There were boats, the Gulf and skyline to look at and distract from the fact that I was running. In Clearwater Beach, it was fun to run through what seemed like an abandoned city. The weather was colder than it has been, plus there was a steady sea breeze. I appreciated the course and conditions so much that I didn’t even mind the inclines up the bridge. I did learn that running down a decline is harder than you would think, and I will be practicing that more in the future. 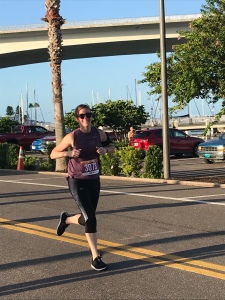 I had trained well enough, so I had no problem finishing the race. Afterward, I checked my watch to see how much time I had before the start of the 5k. I still had about 20 minutes to kill. I was worried that if I stopped, it might make getting going again harder, so I decided to keep running. I slowed my pace and found a circle around a fountain in the park near the start. It was boring to keep going in circles, but I didn’t know the area and was afraid to stray too far. After killing off a little more time, I stopped by the finish to watch Kim complete the 10k. Then I made another mostly jitters trip to the portable toilets. I made it to the starting line again with only minutes to spare, but this time I used those minutes to make my way to the front of the pack. 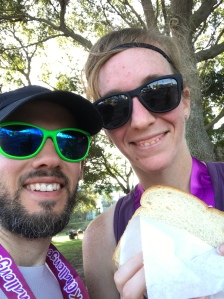 Quite a few more people were running the 5k than the 10k. When the start gun went off, being upfront saved me a lot of stress. It was much easier to get into an open space and run at my speed. The 5k brought me over the Causeway, and it’s beautiful views once again. The race went much smoother, and I felt like my running in between races helped. I finished the 5k in pretty good time, but more importantly, I enjoyed myself. As I came to the finish l, I spotted Kim getting a few good pictures of me coming in. Once I crossed the finish line, I grabbed my PBJ sandwich medal, and we headed to the unlimited PBJ tents. There weren’t any lines for the premade, and the made to order line was short enough for us to take a look. We ordered a peanut butter and marshmallow fluff sandwich for the fun of it to share. It was worth it. After we secured all the other post-race snacks and drinks, I found a spot to stretch. We grabbed a few more pictures before making the walk back to the hotel. 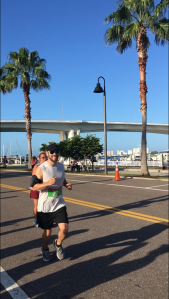 The PBJ Run was really enjoyable. It was a well-organized event at a beautiful location. There were people of all ages and sizes out there, challenging themselves and having fun as well. It felt good to spend a Saturday morning doing something fun and healthy. Although the run is smaller, I think there is just enough fanfare. I was able to have a good time and do what I wanted without feeling constricted or stressed. I’m glad I chose a destination run for my second official race. It was a total change-up and will make me a more complete runner. I learned a lot, and am happy to share the knowledge. I would recommend the PBJ run to anyone who wants to try a fun first race or to anyone who loves the beach. I am already looking forward to the adventure of my next race and hopefully soon, my first triathlon.