I wanted to wait until the second episode of The Mandalorian to review it because my expectations and anticipation were so high for the series premiere. I also knew everyone would be reviewing the first episode, while the second is where we get a better feel for the show. I’m glad I waited because although I loved the first episode, except for the PTSD flashback, I don’t think it gave us a complete sample of the show. The second episode felt more comfortable and exposed.

The Mandalorian continued kept his helmet on and didn’t say much, but we got a better idea of his character in this episode. We learned that he knows less than we do about the Force and the star wars in general. We see that although he is a killer, he does value some people and their actions. I like that we also got to know that he is still just a human in armor. He is highly skilled and has a reputation, but he can be surprised or knocked out or thrown around by a rampaging beast. I think this subconsciously brings the character down to a more relatable level a lot more than meets the eye. Although the Mandalorian is a loner and standoffish, his emotions and personality are going to seep out like this the more we’re around him.

I like the comedy in the episode. The comical moments made the show feel less Western and more Star Wars. There are Star Wars elements throughout the show, but the lightheartedness is mostly missing from the first episode. Between the Jawas and the baby alien, there is a more goofy side to this episode that’s comforting and familiar to Star Wars fans. This open lightheartedness also helps flesh out the Mandalorian’s character as he gets into some of these unusual Star Wars situations.

I think the journey is a significant character in this series. We repeatedly see the Mandalorian traveling and making way across beautiful and dangerous terrain. These scenes are valuable screen time that could instead be extended fight scenes, but the choice to put them in seems conscious. The simple stuff that we don’t usually think of like getting back to the ship or getting to the fight has meaning here. I see the story as a cross between the Man with No Name and a fantasy quest. It’s an unusual combination, especially when taking place in the Star Wars universe. It’s a new way to experience the Star Wars we know. Rather than every scene being star-studded, action-packed, or drama heavy, we get landscapes and ship repairs. It brings the show to the street level and the struggle of the regular guy. We’re not dealing with the fate of planets, were dealing with handfuls of credits. The show is at a more relaxed pace and can spend time showing more Star Wars.

This episode gave more classic Star Wars content to the fans. The fascination with Boba Fett, even though he only has a few minutes of screen time, is not an anomaly. I believe this desire to know more is widespread across the Star Wars universe; we just didn’t know it. I enjoyed seeing a bounty hunter face-off with s Sandcrawler full of Jawas. I even enjoyed being inside the Sandcrawler’s cockpit, just looking around for a minute or two. Star Wars is this revered sci-fi playground most people first discovered as a child and would love to revisit for the first time. This series, which seems very faithful to the original trilogy, looks like it’s going to try to delve more into these things that we loved the first time we watched the original trilogy.

The only thing I didn’t really like about the episode was the thirty-minute runtime. I suppose I could get used to it, but for now, I’m always left wanting more. It continues the fantasy quest theme and breaks down the Mandalorian’s story into set-pieces, almost like a serial. It sets the expectation that we can count on seeing landscapes, action, creatures, and a little more story revealed before the end credits roll each week. It’s good and bad, but at least it’s a style choice that separates it from all other Star Wars. 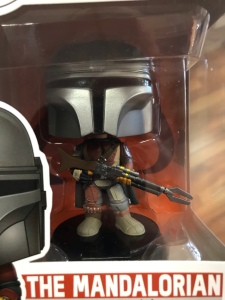 Overall I enjoyed the second episode just as much as the highly anticipated first. I think it showed the story has legs and revealed the format of the series. I feel like I understand the Mandalorian a little better, as well. I think the baby alien he is protecting will have a significant impact on Star Wars in the future, but I’m more interested in seeing the Mandalorian get it there.