A Trip to The Dark Side

This weekend while on our trip, my fiance Kim and I made a stop at The Dark Side Comics & Games in Sarasota. The store is the only comic book store for miles, but it has just about everything you could need. The store is in a large space in the corner of a big shopping center. The parking lot is large and full of activity. There are also plenty of food options in the plaza, which could make the trip even more worthwhile. The store wasn’t too difficult to find although directions take you down a little side road to get directly to the shop.

The store is open 12pm-12am on Fridays. We arrived in the afternoon and it was pretty quiet. Right up front is the new comic wall. There were about 20 rows, 6 comics high of new issues to choose from. These are clearly displayed and easy to grab. The variant covers are the only ones bagged and boarded, but they are still cover price. I found the variant cover of the Guardians of the Galaxy #6 that I was looking for here.
Right by this area is one of the most impressive features of the store, the trade paperback books. There are about eight columns with 6 shelves on at least two of their sides filled with organized trades. This large of a selection of trades is a treasure to find anywhere. I wasn’t looking for anything specific, but I did stumble upon an Indie trade and a Batman Elseworlds trade that I ended up getting. The trades are marked at cover price, but there is another rack with clearance trade paperbacks that’s also well organized. These looked to mostly be about 20% off the cover price and were individually marked. Nearby there is also a rack for kids trade paperbacks. The selection is good, especially since kids trades and comics can be hard to find.

On the other sides of the columns are loose and packaged action figures. These range from older Star Wars Power of the Force and old X-Men loose figures to packaged Marvel Select and DC Multiverse. The figures were priced accordingly with the older loose figures being a little on the low side. There wasn’t a crazy selection here, but enough to look through and a few surprises.

The back issues are located in the back corner of the store. Although there are some here, this is one of The Dark Side’s weaker aspects. There is a glass case with about 40 older and key issues standing on display and about 100 more on display on the walls. Aside from these, there are some back issues in storage shelves similar to short boxes. These are mostly organized, but there isn’t a large amount to choose from. Neither Kim or I found any of the comics on our lists and nothing we sifted through really jumped out at us. On the other side of the back issues though there is another highlight of the store. This is a section labeled “Recommended Reading” with a few shelves of trade paperbacks on display organized by writer. There are about 15 writers featured with a few selections that they have written for various publishers. I thought this was a useful and thoughtful feature of the store for new and experienced readers to discover comics. 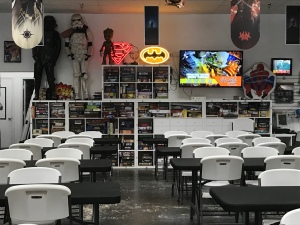 Along the rest of the back of the store are tables for gaming. There are about 16 tables set up in rows available for use. This is a large space and I imagine as this the only comic store nearby that these tables are full at times. Covering the long wall by these tables are lots of Warhammer and other gaming accessories including art supplies. Gaming is definitely a focus of this store and it probably has the most gaming accessories I’ve ever seen. In the center of the store, there are multiple rows of other tabletop games. These are old and new and include some used games as well. On the ends of each of these rows, a game is set up for display and demonstration. This is a nice touch as it’s always hard to determine the details of a game when it’s in the box.

The last row by the tabletop games is actually video games. There are games, consoles, controllers and other accessories. These are mostly for all the older systems and most of the games are used. The prices on the used games are good, such as $8.50 for Used Indiana Jones and the Emperor’s Tomb for Xbox. It is hard to find vintage games and accessories, so it’s great that they are offered here as a bonus.
The Funko Pop selection here is fairly small. The variety is wide, but not too many to look through overall. I didn’t see any rare or chase Funkos. Nearby there is also a section made up of multiple shelves for Manga and Gundams. There were a lot of sealed Gundams and I think the collection of these is better than the other figures in the store.
There are a few other displays with assorted wallets, mugs, mystery minis, and other knick-knacks. These were priced well with a nice X-men bifold wallet for $10. 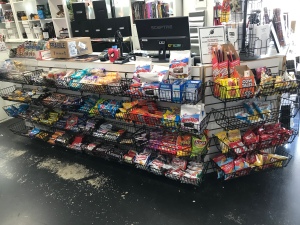 Unfortunately, another weak area of the store is statues as there are a few, but not enough to talk about. Inside the long front counter, there are Magic the Gathering and Pokemon single cards for sale. These are all on display and individually priced. The final icing on the cake is a large selection of snacks and drinks. There are multiple large drink coolers and dozens of snacks including snack cakes, candy, and beef jerky. I’m guessing the great snack options is due to a large gaming community that spends extended amounts of time in the store.

I think The Dark Side Comics & Games is a great store. They have a little bit of everything. They make up for the areas they are weak in such as statues by being strong in others likes tabletop games. The shop space is well organized and inviting and the prices were reasonable. I recommend The Dark Side Comics & Games for anyone interested in gaming of any kind or anyone looking for a good trade paperback. I give the store 4 out of 5 stars.